Strong cat urine odor and other smells are common after encapsulated crawlspace work is done. The good news is expert Michael Masserang of Masserang Consulting has an effective, affordable and permanent solution.

There’s no shortage of reasons while an encapsulated crawlspace could be giving off bad smells, especially the very common problem of crawl space cat urine odor. The frustration comes from trying to remove the smell, which is generally much easier said than done. Answering the call is Specialty Foundation Repair Crawlspace Consultant Michael Masserang. After investigating many different options Masserang has a solution that resolves the problem, the Atmox System. With the odor issue effecting up to 10% of all crawlspace encapsulations, this is a welcome development for many homeowners facing the issue. 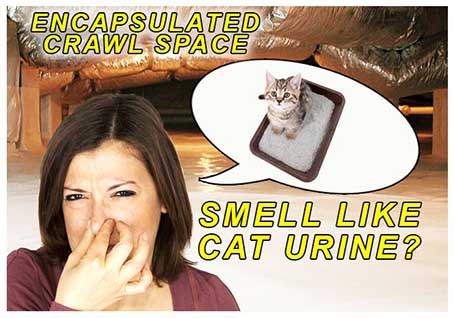 “I have a strong background and extensive experience in foundation repair, crawlspace moisture control, water proofing basements and crawl spaces, indoor air quality and other associated engineered solutions,” commented Masserang. “This was a great help in finding a solution to the cat urine odor problem, which is a very serious one. No one wants to be sitting in their living room or bed room and have that kind of smell seeping in. The Atmox System is a game changer.”

According to the expert crawlspace consultant, the odors can originate from many different sources. First, when encapsulation crawlspace work is done, it often traps in any existing smells. Beyond that other material involved in the work, like plastics and HVAC materials can give off unpleasant smells. Bio film, fungi and mold also release odors that are more than repulsive and impact homeowner quality of life in serious ways.

The Atmox System controls ventilation which can both manage moisture inside a crawlspace and also remove odors and smells of all kinds. Rather than a thermostat the system uses dew point comparison sensors for a more accurate and reliable way to measure exactly what’s going on inside a crawlspace reliably. An engineered fan system ensures the entire crawlspace is kept ventilated, a vital part of keeping a crawlspace hygienic and not giving off terrible smells. The entire unit runs on one electrical outlet for control, sensors and power supply, and is quite easy for a homeowner to manage.

Michael Masserang and his team at Specialty Foundation Repair are experts in installing the Atmox System in a way that maximizes its benefit, earning the company consistent and enthusiastic praise, for removing any existing odor issues and keeping them away permanently. Masserang personally has done hundreds of crawlspace inspections in both residential and commercial properties and is widely recognized as the local Charlotte area’s crawl space expert.

Dan Reinbold, from Weddington, NC, recently said, “After contracting with one company to install french drains and tarp the crawlspace and then another to encapsulate, insulate and install a dehumidifier in it we started getting a cat urine-like smell that occasionally, mostly during season changes, entered our home. While the smell was intermittent inside the home the smell was constant in the crawl. The other companies offered solutions but refused to guarantee that even if I re-tarped the entire crawl space with them that the smell would go away. Enter Mike Masserang and the Atmox solution. I researched alternatives for nearly a year after meeting with Mike but he was the only one, working with Masserang Consulting to install the Atmox system, who guaranteed, in writing or my money back, that they would eliminate the smell. They kept the remainder of the crawl the way it was, including the dehumidifier but installed the Atmox system. The install took one day. The installer did a great job, was neat, clean and efficient. THAT SAME NIGHT the smell was gone, even inside the crawl and we haven’t had the smell again. It was nothing short of miraculous and worth every penny. We’ve had the system a month and this is the time of year when we would often get the smell, but it’s completely gone. We couldn’t be happier. I really dug into the debates of full encapsulation versus encapsulation combined with the Atmox system and I can tell you that the Atmox is the way to go. And if you have a smell issue, Mike and Atmox will take care of it, period.”